Canals, Railroads, and Repudiation in Pennsylvania 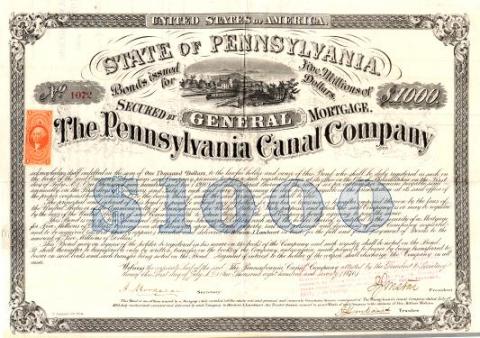 This speaker program is about transportation, it’s financing and the problems that go with it.  But to start, it goes back to the first major State transportation project – canals, then its replacement - railroads.  In the 1820’s both the citizens of Pennsylvania and the government wanted to expand settlement and commerce west of the Susquehanna River and Allegheny mountains. At that time, there were only turnpike roads or the National Highway to take westward. In those days, it took a horse drawn freight wagon twenty-three days to cross the State. Thus the Pennsylvania Assembly of 1824 proposed Right of ways mainly for the building of canals of the Main Line of Public Works to be built across the southern part of Pennsylvania. The period was before commercial railroads existed, while the focus of the act was to create through building a canal system, the capability to ship heavy or bulk goods (and soon after passengers) and connect Philadelphia to Pittsburgh. More importantly the new canal system would amplify the new and growing markets in the developing territories reached by the Ohio River now called the mid-west. This new canal transportation would reduce the same cross-state trip to just four and one half (4½) days depending on the weather. However, such an undertaking, which cost $25,000,000, had to be financed entirely by the Commonwealth of Pennsylvania, as did the current concrete highways (shared with State and Federal money).  Constructed between 1826 and 1834, the hybrid canal system was 395 miles long and the state took on a lot of debt. 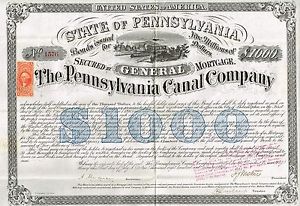 During the 1820’s Pennsylvania was also in a transportation technology race with the neighboring State of New York.  On October 26, 1825, New York opened its canal, the Erie canal, that stretch across upper New York State from Albany, on the Hudson River, to Buffalo, at Lake Erie.  To the Pennsylvania legislature, it was time now to build their own canal, and worry about paying later before all of the freight moving west was through New York.

Once built though after all that work and all that debt, it was not long before steam trains and railroads were developed and trains could carry bulk and heavy commodities. The railroads with their efficiency could carry more freight than mules that pulled a single barge on a canal. Within two decades, the railroad sank the Canal business, which never made a profit.

Pennsylvanians before the Civil War shared two traits with their modern counterparts: they were in a hurry to get where they were going, and they didn’t like to pay taxes. This combination led to problems then as it does today, as citizens looked to their government to build the aforementioned canals and railroads, but were reluctant to pay higher taxes when these projects cost far more than expected. This talk focuses on two episodes. First, in the 1840s, the state's reluctance to pay the debts piled up in digging its canals led to Pennsylvania defaulting on its debt for two and one-half (2½) years, giving it a decidedly negative reputation overseas. The state learned its lesson and did not offer aid to the next wave of innovation, railroads, but counties and cities across Pennsylvania rushed in to fill the gap. In the 1850s, Pittsburgh and Allegheny County repudiated $4-1/2 million in bonds used to buy stock in local railroads. When ordered by the state Supreme Court to raise taxes to pay the bondholders, the Allegheny County Commissioners refused and served more than a year in jail for contempt of court. When compromise bonds were finally issued in the middle of the Civil War, they extended the indebtedness of the county and city for fifty years.

Our speaker, Perry K. Blatz, returns to our group for this talk on Sunday March 5th at 2: 00 pm in the Township Municipal Center’s Council Chambers. Dr. Blatz taught United States history and public history for more than twenty-five years before his recent retirement from Duquesne University. He received his Ph.D. from Princeton University and has specialized in the economic and labor history of the 19th century. Please join us to learn about these transportation troubles and governments’ ways to finance them and the later handling of the debt.

As usual, light refreshments will be served. See you there and remember there is no barge service on Brush Creek and no train or trolley service that day so please drive your car or make other arrangements.