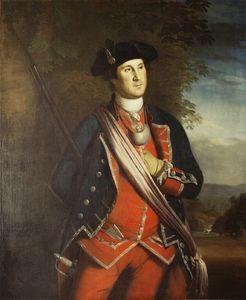 George Washington made plenty of mistakes as a youngster, including cracking walnuts with his teeth, and you know where that got him. Later in his life, although he had vast holdings, when he was elected President and had to go to the inauguration in New York, he was cash poor and had to borrow money to make the journey.

Ironic for such a statesman, who would later have his likeness on the front of the most popular currency, to need to borrow funds. President Washington, as humble as he was, would later not take a salary for being President. Our speaker, Len Barcousky, will talk more about George’s earlier years, the time in life when one learns from their successes and failures.

"George Washington Flopped Here”: The title of Len’s talk has a double meaning.

George Washington spent many nights in the 1750's sleeping under the stars during his multiple journeys to Southwestern Pennsylvania. The father of our country did indeed “flop” here, catching whatever rest he could in the area around modern-day Pittsburgh and Butler County.

Washington, who was just 21 when he first saw the Forks of the Ohio, also made his share of mistakes in this area. He headed up an unsuccessful diplomatic mission in the winter of 1753-54 to talk to the French at Fort LeBouef (and came through what is now Cranberry Township), launched a world war the following spring and was forced to surrender for the only time in his military career on July 4, 1754 at Fort Necessity.

But he learned from each of those “flops” and never made the same mistake twice.

Len Barcousky will bring the stories of young Washington’s early adventures to life, using primary sources that include his own journals and letters.

Please join us for this free program and learn about Washington’s Flops around here on April 7th in the Library. A little about our speaker; Len Barcousky began his journalism career with a summer job in 1970, retiring 45 years later, in 2015 from full-time work at the Pittsburgh Post-Gazette. He continues to write his bi-weekly “Eyewitness” column for the Post-Gazette. In it, he looks at how, now historic, and not-so-historic events were originally reported in the Post-Gazette and its predecessor publications. The bulk of Len’s career was spent at the Post-Gazette where he worked in many departments and performed a variety of jobs, including more than a decade as a reporter, editor and bureau chief based in Cranberry Township.

Len is also the author of three books. Folks, this will be a good program.

This is a joint program with the Library; as such, you will need to register for this program. You have three choices.

As always light refreshments will be served. We were going to serve cherry pie but it seems that someone cut down the cherry tree!