Over the Decades at Moraine State Park 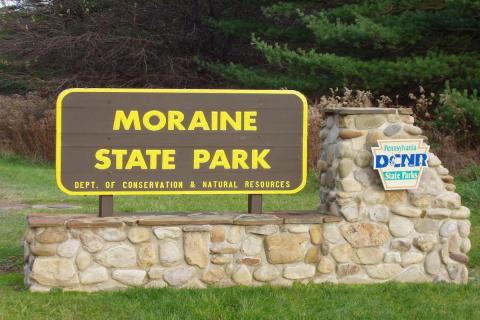 Before it was converted to a park, it was farmland; mostly wetlands, containing oil and gas fields that had been both deep and strip mined for coal.  The land was also mined for gravel, stone and sand left behind by some rather large ice. Limestone and clay were mined to make ceramics; nearby New Castle was a large manufacturing area for ceramics. Shale was mined to make bricks.

Fourteen to twenty millenniums before that time, the ice mentioned above was part of the Wisconsin glacier. A tongue of the glacier was in this area. The edge of the glacier is called a “moraine”. The glacier stripped the topsoil and it left a lot of debris north of what is now the park. As the glacier was melting and receding, water became trapped and formed a large glacier lake. In a side note, in the 1950’s, tens of thousands of years after the glacier lake evaporated, this glacier lake was named Lake Watts.

American Indians later lived in the area. In 1753 the Muddy Creek Valley had claims to it by both the French and the British Empire. A 21 year-old Major was sent by the Virginia Governor to tell the French near Erie to get out of this British Territory. The Major was George Washington and his route went right through the Muddy Creek valley.

Around 175 years later, the Western Allegheny Railroad ran the full length of the Muddy Creek Valley, and was used to transport coal from the mines, often to Pittsburgh and other manufacturing areas. However, it was abandoned in 1939 when the mines were depleted and closed. The railroad had a freight depot in the village of Isle, which had a spur line into the coal mining area of southern Brady Township. Isle was a small hamlet with about 10 houses.

Around this time, two individuals would independently come to this area and admire the landscape that the glacier left behind in the valley and Slippery Rock gorge. The first individual was Edmund Watts Arthur, a former Pittsburgh attorney, amateur geologist, naturalist and nature writer. He wrote for the Pittsburgh Sun-Telegraph and articles often featured this area. The second gentleman was Dr. Frank W. Preston, a glass researcher, sent from England to Butler to work. Living in Meridian, he later opened his own glass research lab. Dr. Preston was also an amateur geologist and naturalist. The two men met on one of their many tours of the area and for two years around 1946, worked together to geologically document the land. However Mr. Arthur suddenly died of a heart attack and left Mr. Preston on his own to carry on the idea of a park for the area. Months after Arthur’s death, Preston gathered influential people from Pittsburgh and the surrounding region on a piece of property he owned in Butler County. He laid out the idea for Moraine State Park, as well as a recreation of the glacial lake, which was named Lake Arthur.

In 1963, Mr. Preston formed the Western Pennsylvania Conservancy to do just that. Muddy Creek was dammed to create a modern lake named Lake Arthur in honor of his late friend Edmund Watts Arthur. The lake is a smaller version of the former glacial Lake Watts. 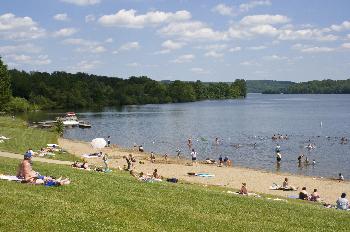 In the winter one can ice skate, snow mobile or cross country ski.  Water activities includes sail boating, kayaking, paddleboards, pontoon boating and both water and ice fishing. The lake is 8 miles long with 42 miles of shoreline.  One of the several trails in the park is the North Country Trail that starts in the state of North Dakota goes through the park on Glacier Ridge and ultimately ends in eastern New York State.

In 1977, there were 28,000 Boy Scouts in the park for the National Boy Scout Jamboree. A great location!

Our speaker is Polly Shaw. Polly is a retired teacher who worked at Haine Elementary School and resides near the park. Polly has written a book entitled Moraine State Park, published by Arcadia Publishing.

There is much much more to the park that has developed over the decades.  Please come and learn more about these gentlemen with a vision, the damming of the creek and how long it took to fill. Learn about Rt. 422 along with the village of Isle disappearing. Find out about our National symbol that resides in the park and the fish it snacks upon. Please spend an “indoor” day in the park with us on Sunday October 29th at 2:00 pm in the Cranberry Township Municipal building’s Council Chambers. Light refreshments will be served at the meeting.